Home Guides Everything About The Lightning Strikes

Lightning is an under rated killer.

In an average year, lightning kills and injures more people than hurricanes or tornadoes. On the average, 80 deaths occur from lightning each year in the United States. Cars and homes are relatively safe from lightning. Holding a 9 iron on the 10th fairway isn’t!

Lightning and the associated thunder can be frightening. But it doesn’t need to be dangerous if you follow some simple rules.

When Does Lightning Occur and Why?

When a thunderstorm occurs lightning also exists. This is because a thunderstorm is classified by lightning. In order for either of the two to be present in the atmosphere, clouds must first form. The clouds form when air near the earth’s surface is warmed, causing it to rise since warm air rises. Think of a marshmallow in a microwave; as the microwave heats the marshmallow it begins to expand. This is similar to most things, like air. When air heats up it expands and this expanding air has to go somewhere because it is taking up more space, just as the marshmallow does, so this expanding warm air rises. 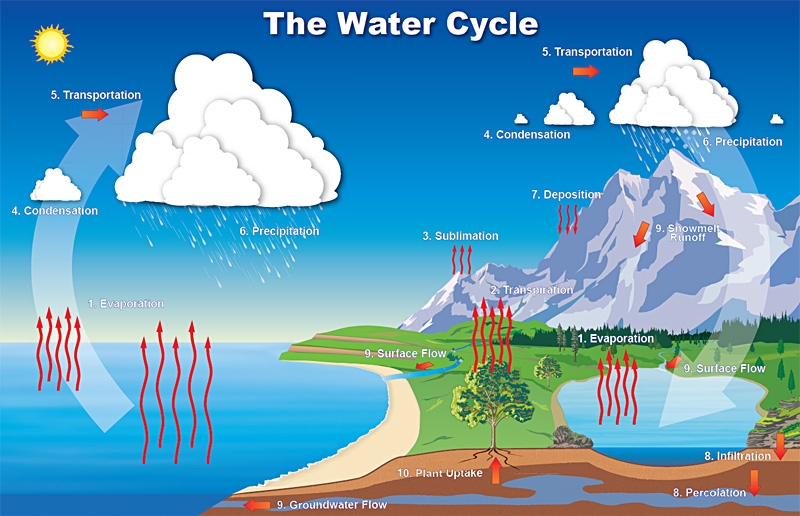 So what does this have to do with the cloud? Well, as the air rises it is losing its heat and cooling. When things cool, they condense; think of the marshmallow again as it cools when you take it out of the microwave (it shrinks, or condenses). In a general sense, to give you a brief idea of how clouds form, when condensation occurs, clouds take shape; you must keep in mind, however, that there is much more involved in cloud formation, but this was just to get you thinking and give a place for the lightning to happen.

The most common thunderstorm cloud is a tall cloud which is precipitating, called a cumulonimbus cloud (cumuli- meaning tall, high altitude, and nimbus meaning precipitation). These clouds form when conditions include upward winds, rather moist air, and cooling temperatures. Within this cloud, there are many electrons giving off their charges. The tendency of charges within a cloud is to have positive charges gather toward the upper portion and negative charges in the bottom of the cloud.

When the difference between these charges is great enough to overcome the air’s natural insulation, which keeps these charges from mixing, a lightning flash can take place. This charge difference builds up to millions of volts before the stoke of lightning takes place. The lightning bolt actually happens because nature tries to maintain equilibrium, a state of balance between all things. This is why the lightning that you see is a discharge of energy in the form of electricity.

Learn where does lightning strike

Lightning will not strike unless there certain conditions are met. Lightning is a circuit, for it to strike the circuit must be complete or the energy will just keep moving without going anywhere or doing anything. To close the circuit, there are three places that lightning may strike.

Find out about the cloud to ground striking process

A stroke of lightning only takes about 1/2 of a second to occur. There are two key ideas associated with the process of lightning stokes. They are termed as stepped leaders and return strokes. There is also a dart leader. With these three, the path of a lightning bolt can be covered from the place where it leaves the cloud to its connection with Earth.

A stepped leader is a very faint discharge of lightning inside a cloud. These discharges move toward the ground in series of steps; each step down is about 50 yards long. When the leader steps down to Earth and connects to the ground or a tree (for example) the circuit is complete and the lightning strikes.

A return stroke is a lightning stroke that originates from the ground. The stroke travels back to the cloud.

A dart leader happens when electrons are discharged, taking the initial path of the lightning stroke to the ground. This means that lightning can strike the same place more than once. Lightning has favorite sites to strike and is capable of following the same path twice, contrary to what some people believe.

Since heat makes things expand, like a marshmallow in a microwave, the air expands when the lightning heats it. Because the rate of expansion is so fast, the air actually vibrates, causing waves. These waves are the sound waves that we hear as sound, or thunder.

Thunder travels about one mile for every second you count after you see a stroke of lightning. This allows you to figure out how close the lightning struck to where you are.

For example: let’s say that you see a flash of lightning and then begin to count how many seconds before you hear the thunder. If you count 15 seconds this means that the lightning struck about 3 miles from you (divide 15 seconds by 5 seconds to figure the stroke was 3 miles away).

How to stay safe during thunder storm

Each flash of lightning is equal to about 1 billion volts of electricity. That is enough energy to light a 100-watt light bulb for three months!! That is a lot of energy, and you do not want to get struck during a thunderstorm and have all that go through your body. To help prevent anything like this from happening, here are some safety tips to help prepare you when there is a thunderstorm.

Things to avoid include:

** Wait 30 minutes after the last lightning stroke before partaking in any of the above activities or going to these areas.

What to do if you are outside:

For the current info check out the latest lightning strike map of USA.