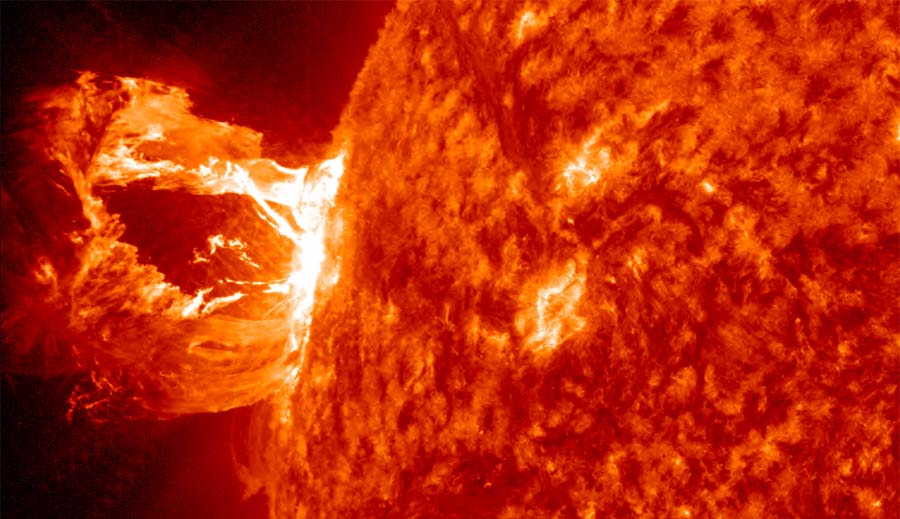 Sitting nearly 93 million miles from Earth, the Sun is the focal point of our solar system with each planet and their moons orbiting around it. Even at this great distance, the Sun’s spectacular energy can pose significant risks in our world. With so much hinging on what’s happening on and around the Sun, it is critical for scientists to continuously monitor solar activity. From solar flares to solar storms, that could interfere with Earth’s electromagnetic field, providing accurate timely warnings of potentially- harmful space weather and its impacts on Earth is more important than ever before.

That’s where the Deep Space Climate Observatory satellite mission, better known as DSCOVR, comes in. When it launches in early 2015, the DSCOVR satellite will continue monitoring the constant stream of charged particles from the Sun, also called “Solar Winds.” These observations are the backbone of NOAA space weather alerts and forecasts. Located approximately one million miles away, DSCOVR will orbit the Sun in a fixed position relative to Earth.

“Occasionally the Sun will have large eruption of magnetic field energetic particles, and if that comes towards the Earth and collides with the Earth’s magnetic field in the magnetosphere, that’s when you can get disturbances that we call solar or geomagnetic storms. Now, these geomagnetic storms can be very damaging to critical infrastructure on Earth such as power grids, aviation communication systems, satellites in orbit.”

“Having satellite in orbit that can provide us with advance warning if solar activity occurs that could create issues for our system is actually the first line of defense if you will, for us to be able to take the appropriate action to protect our system from any impacts that could happen.”

Experts estimate the most extreme solar storms could cause one to two trillion dollars in damages and require a decade to recover.

“Having some advance warning is critical to us for a solar storm or hurricane. The advance warning we get from NOAA for hurricanes and other major storms, the National Weather Service, I kind of liken that to the same sort of thing, the essential warning we need from our solar storm activity. So it’s pretty critical because you can’t reliably predict the storms from Earth-based devices, you need the satellite out there. So having that extra hour warning, I’ll say ahead of time, allows us to begin to put procedures in place to protect our systems, so whatever outages may occur we can more quickly restore customers.”

DSCOVR will join two NASA missions: the Advanced Composition Explorer, or ACE, and the Solar & Heliospheric Observatory known as SOHO, and will also host NASA funded secondary sensors for Earth and space observations. NOAA Will manage DSCOVR and use its Space Weather Prediction Center to distribute critical space weather data to users within the United States and around the world.

“DSCOVR data will drive our latest forecasting models that we are developing now. This will allow forecasters to provide forecasts; currently we just do nowcast of the geomagnetic conditions. But forecast of the geomagnetic conditions of Earth, not only for a global sense, but also regionally, so we can see what parts of the Earth will be particularly impacted by the geospace disturbances that come from the Sun.”