So, why is the Doppler radar important? Without it, meteorologists would not be able to see what is going on inside a thunderstorm very well, nor would we be able to forecast the movement of a thunderstorm very precisely. The warnings would be less accurate, putting more people and property at risk during hazardous weather. 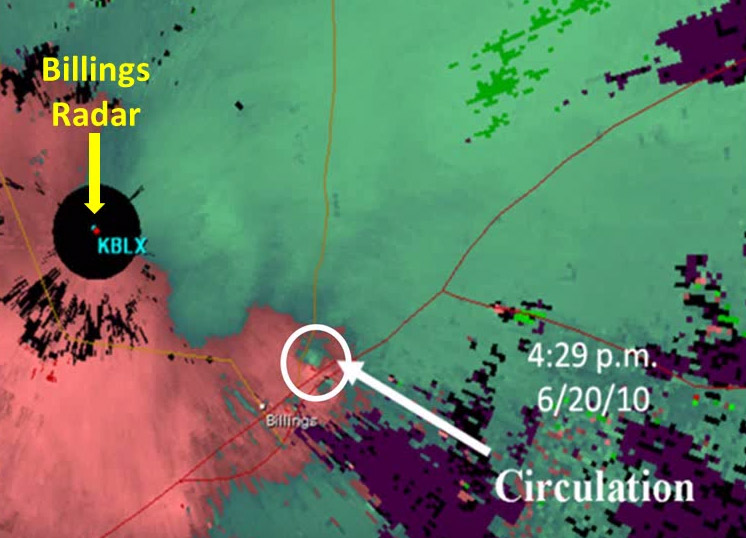 In this example, you can see a snapshot of Doppler radar data showing circulation at the time of the June 20th, 2010 Billings tornado. The Billings Doppler radar, labeled KBLX, is in the middle of the black circular region towards the left of the radar image, while the circulation is in the white circle.

How does the Doppler radar work?

In addition to weather stations the weather surveillance radar (WSR) is one of the most important tools the meteorologists use to provide a detailed forecast.

In essence the WSR works by shooting out pulses of electromagnetic energy at specific elevation angles above the ground. When these pulses of energy encounter an object in the atmosphere, such as a raindrop, hailstone or snowflake, part of the energy pulse bounces off of the object and returns to the receiver. This process is illustrated in the animation. The signal produced by the object is then sent to the signal processor, where it is turned into usable data, called base data, which we see as reflectivity and velocity. Reflectivity shows where precipitation is, while velocity information helps us identify rotation and strong winds within a storm, allows us to determine wind speed and direction behind a cold front and allows us to determine which direction and how fast an object in the atmosphere is moving.

The radar rotates 360 deg to capture one sweep. Multiple sweeps are required to build a layered inspection of the atmosphere, called a volume sweep, or volume coverage.

NEXTRAD is an enhanced Doppler Radar, having a greater range of 450 km, and higher resolution radar specification able to capture more detailed information.

The doper radar only transmits energy about 7 seconds out of every hour. The majority of the time it spend capturing energy.

Note that what the radar shows us is not necessarily what is reaching the ground. As the radar beam goes out from the radar, it continually rises in elevation. By the time this beam reaches a town it is well over 10,000 feet above the ground. The radar cannot detect precipitation or winds below the beam, which is why scientist relies on reports to give us some ground truth.

There are a couple of www pages you can check to get an accurate weather radar data. All of them are animated, interactive, and have zoom out and zoom in capability, to let you choose a desired location. Some adoped additional layers – such as temperature, cloud coverage, and winds. 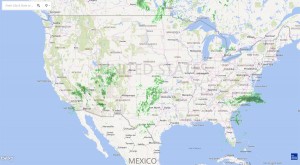 The Weather Channel and weather.com provide a national and local weather forecast for cities, as well as weather radar, report and hurricane coverage.

Their map is Bing based with additional coloring and layers. 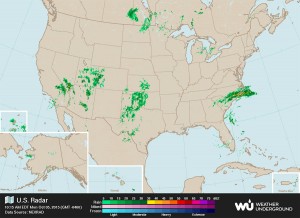 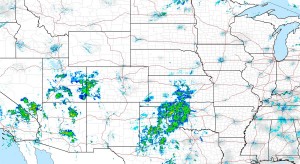 NWS is a part of the National Oceanic and Atmospheric Administration. It’s the official U.S weather forecast service with information about meteorology, fire and aviation. 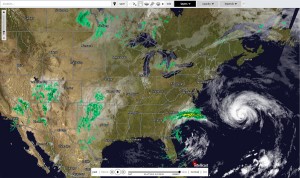 They provide high quality weather data to users all across United States. They equip one of the most advanced systems for forecasting weather. The work with businesses as well as weather enthusiasts.