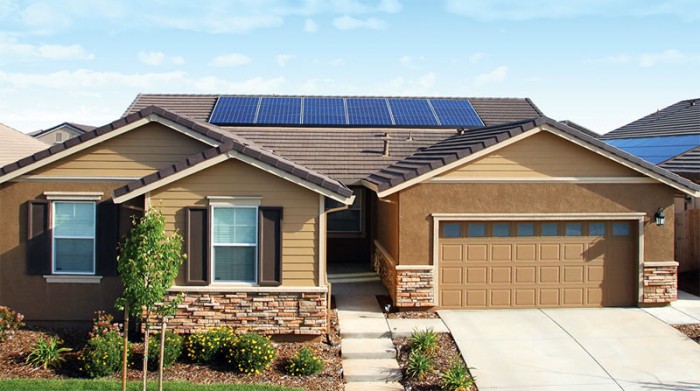 SolarCity announced that it has produced the most efficient for solar panel roof in the world.

Cost of production of these new panels is the same as any other standard model.

The SolarCity’s solar panels have efficiency of over 22%. The average efficiency in the class is around 15%, this is around 7% lower than the panel produced my SolarCity.

“The panel manufactured by our company generates more energy per square meter and collect more energy during one year period compared to any other panel for roof installation in the world. This will be a solar panel that will be produced in the largest quantities in the Western Hemisphere,” reads the statement from the company.

Founders of the Company located in San Mateo, Californian, are Elon Musk and his two cousins ​​Peter and Lyndon.

The company head and CEO is Elon Musk.

Production will start in December and will be in small batches. The company’s Fremont, California, 100 MW plant will house the production and assembly process. Later, when needed the production of panels will move to 1 GW pant in Buffalo, New York.

SolarCity states that at full production capacity, the 1 gigawatt factory will produce between 9000 and 10,000 solar panels each day. The factory should be ready in early 2017, said company spokesman Jonathan Bass.

Renewable Energy Test Center was the institution that tested the panels and indeed the efficiency showed was 22.04 percent.

The panels’ output power is form 30 to 40 percent more than today’s models, and their costs of production will be the same – around 0.55 cents per W. 355 watts – that will be the output capacity of a regular 1.61m solar panel.

SolarCity’ panel works very well compared to other modules and that is very noticeable at high temperatures, this allows the panel to generate more energy per year than competitors with comparable size.

Lux Research analyst, by the name Tyler Ogden, said that the SolarCity claims that they have build a 22.04% efficient solar cell “are indeed legitimate”.

SunPower, another producer of highly efficient solar cells from crystalline silicon, for tiles mounted on the roof and solar panels, recently contested the number 1 position. SunPower X Series has a 21.5 percent efficiency, which now put them on number 2 spot.

SolarCity is using the same photovoltaic cells used in the previous model, but the engineers at company have managed to “put” more cells in the same space and to arrange them so they have minimal energy loss, said Ben Hwang, senior vice president of product and engineering at SolarCity.

“Manufacturers are constantly improving their processes of manufacturing solar panels and this probably means that SunPower are at levels higher than the reported earlier this year,” said Ogden .

Manufacturers of solar panels continuously raise the bar on efficiency, introducing innovative solutions and designing new technologies that provide them with much desired improvements.

“The achievement of SolarCity’s 22% efficiency is important, but more important is their assertion that it will produce 30-40 percent more energy than a regular panel with same parameters “, Ogden says.

Small efficiency improvements optimize the productivity and deliver more value with the produced devices, allowing them to generate more electric power over the lifetime of the solar panel.

“It’s great to work on the technology such as for solar cells, but sometimes we forget about other “less important” design decisions or less fundamental methods for improving the product,” said Hwang. “In our case, the ting we focused on was the packaging”.

SolarCity claims that its panels do not suffer from loss of efficiency because of rising temperatures, at least not to the extent as other competitors.

Modules created with the thin-film technology, comparable to those manufactured by First Solar and SolarFrontier, were previously competing and monopolizing the non rising temperature segment. Now this function that will make difference when choosing a suitable model in countries with higher average yearly temperatures”

The company expects their technology to be initially adopted by schools, home owners, small business owners, and organizations interested in renewable energy. But SolarCity also states that the models are also well suited for solar fields of renewable energy producers and other land-based installations.