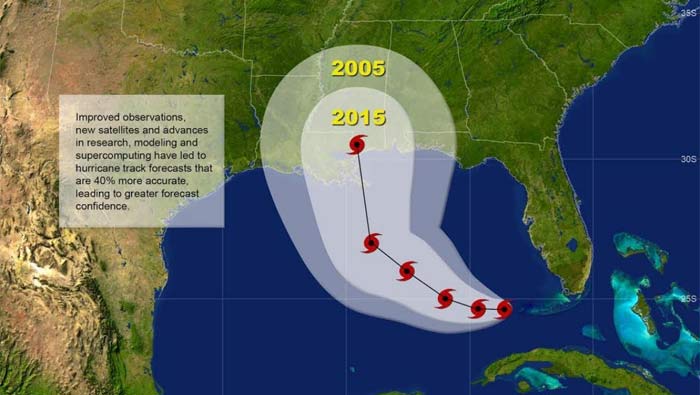 One thing that scares meteorologists is apathy toward the arrival of a hurricane along our beaches.

People want to believe it will not happen here.

Meteorology is not an exact science. That is especially true when it comes to forecasting the path of a hurricane.

Because of the near misses with limited damage, some people believe meteorologists cause alarm needlessly and don’t prepare propery.  But every forecast should be taken seriously.

The National Hurricane Center is responsible for getting the forecast path of a storm to the public.

The information comes together to create the official forecast track.

It is a common misconception that massive computer power at the National Hurricane Center can pinpoint the storm’s path. People get upset when the forecast is wrong. They want to know why forecasts aren’t perfect.

For an experienced forecaster, a good hurricane forecast is getting the location within 50 miles and wind speed within 8 mph in the period 12 hours before landfall.

Since a hurricane spends most of its life over vast bodies of open water, getting data needed for forecasts can be difficult.

The size of these oceans and seas makes it possible that observations made to feed the computer models for forecasts are limited or inaccurate.

Bad information can throw off a forecast by miles.

Also, the effects of the atmosphere on the physics of the hurricane are not fully understood.

Forecasters analyze a wealth of data, including conflicting computer models.

This is all taken into consideration in making the best estimate of a three-day track and intensity forecast.

The shorter forecast times will have a smaller margin of error. If the forecast extends several days, there is more room for error.

Strike-probability graphs are used to convey the uncertainty of the hurricane’s path and show the areas most likely to be affected.

These indicate the statistical chance the a hurricane’s center will pass within 75 miles of a location within three days.

The average error in predicting the path of a hurricane two days in advance is 180 miles in any direction. For one day out, it’s about 100 miles.

Because of the large margin for error, forecasters often issue hurricane watches for a sizable area. If forecasters waited until the probability of a hit in the Tampa Bay area was greater than 50 percent, there would not be enough time to evacuate.

A hurricane watch is issued when the storm may impact within 36 hours. Maximum probability runs at 25 percent to 35 percent at this time.

This is where people may have lost faith in forecasting, causing them to ignore warnings.

With better readings from aircraft and satellites, forecasters have been testing a five-day warning system.

Forecasts are slowly getting better.

A lot of work goes into each forecast. It takes only one direct hit by a hurricane to change people’s minds and lives forever.

Just ask the folks in South Florida, where Hurricane Andrew came ashore in 1992.

The average error in predicting the path of a hurricane two days in advance is 180 miles in any direction. For one day out, it’s about 100 miles.