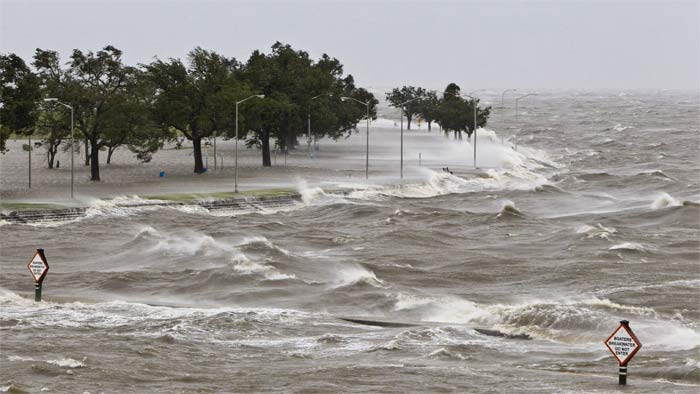 Though destructive, it isn’t a hurricane’s powerful winds that bring the most potential for damage and danger along the coast.

That threat comes from the storm surge, the rise the waters far above normal high tides.

It can wreck buildings far from the beach and wash supporting sand from under seawalls and structures, causing them to topple. It can engulf coastal roads and causeways.

The storm surge is why people near the coast are ordered to evacuate. The size of the storm largely determines the height of the surge and how large an area will be evacuated.

The surge from a major hurricane can flood low roads leading from the coast three to five hours before the eye of the storm arrives. It is very important to know what the surge can to be properly prepared.

The Tampa Bay area, because of its large population and geography that can trap the storm surge and push it even higher, is considered the second most dangerous area in the country for storm surge behind New Orleans.

A hurricane moving over open ocean creates a dome of water beneath it. At sea, this dome easily moves with the storm and might be only a few feet high.

But when a storm gets closer to shallow water near shore, that dome rises and bulges upward. Depending on the strength of the storm, that bulge, or surge, can push water five feet to more than 18 feet above normal tide levels.

The Gulf Coast is more vulnerable to storm surge because the gently sloping ocean floor allows a higher surge to build than does the steeper Atlantic Ocean bottom.

And the Tampa Bay area is the most vulnerable place on the state’s Gulf Coast. If a powerful hurricane hit just north of Tampa Bay at high tide, the surge could put much of downtown Tampa under water.

Davis Islands, MacDill Air Force Base and possibly the port could be submerged. At the least, the surge can bring Gulf or Bay waters much farther inland to places never reached by the highest normal tides.

The force of the hurricane’s winds along with the surge can prevent the tide from flowing out as it changes from high to low.

If that trapped water remains until high tide returns, a minor storm can cause shoreline flooding.

As the storm moves ashore, the surge pushes inland along rivers and bays. The surge can be especially dangerous on rivers as narrowing banks force the rising water higher.

And you don’t have to be directly on the coast for the surge to hit.

A hurricane that struck Texas in 1961 caused a storm surge 19 feet above normal high tide in bays 20 miles from the coast … 6 feet higher than on the coast where the storm made landfall.

On top of the storm surge, wind will kick up waves 6 feet or higher that will batter any structures in their path.

Those waves would cause more damage than the surge alone.

The waves and high water will do more than flood and batter the coastline. Hours before the worst of the storm hits, waves and surge will erode sand and dune lines along the beaches. They will undermine seawalls, roads and buildings that are normally safely above the high-tide line.